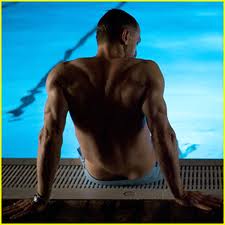 I wonder how many times it's going to take before I get tired of using Daniel Craig as a physical model for me to let my imagination take hold  and run away with it.

I have started and run with a million different story ideas. And I realized I wanted to work on a book 2 of a series. I had two choices, The Gladiator Chronicles or Bounty Hunter. I have two terrific homes for those series TGC is with MuseItUp Publishing and Bounty Hunter is with Hydra Publications. I received a revise and resubmit for Oracle. They said I was thisclose to a contract. I know what needs to be done, but it's really hard for some reason for me to get excited about that series at the moment. So I stepped away from it no worries, it'll happen when the time is right. However there was a desire in me to write a second book in the Bounty Hunter series as well. I'd go to it. Write a chapter. Lose the magic. I didn't want to repeat what I had done in the first book. Have I mentioned I've never written a book 2? Finding my way to book 2 wasn't easy but seeing that the character of James Lyle is a dead ringer for his cousin, Logan Mitchell the hero from book 1 figuring him out wasn't too hard. The heroine presented a different set of challenges.

What's her story. What's the reason she is doing what she's doing? The story just sort of unfolded on me and that doesn't happen very often. Or at least not as often or as easily as I'd like. Yes, I have five contracts, but I write EVERY day. And I feel the pressure to produce. I write on the grittier side and I tend to mix a lot of romance in. But there is this attitude that the two can't mix. Then there's the question of my scifi/fantasy/futuristic stuff I mix in a lot of sex, and science is totally made up. This keeping the science in science fiction makes me roll my eyes because I know it's a swipe at what I do. As for the people who can nail that sort of thing congratulations, you make money at it hey I'm right there with you. But I think I'm just as legitimate as the 'hard science' crowd. Which is why I finally got out of my own way and decided to have fun writing Bounty Hunter 2:Bloodstone.

It took me several months but I got here. And I plan on running with it.
Posted by Unknown at 8:01 PM