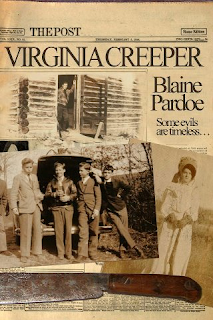 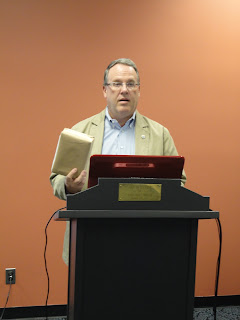 The long road to getting published - Virginia Creeper.
Eight years ago I began to write the story of the events portrayed in my book, Virginia Creeper, and a few years after that began to market the idea. I had to wait, out of the request of one of the parties involved with my 'research' for the book. (When you read the book, you'll understand…) My agent shopped it around and we actually got a few very enthusiastic responses. Editors liked the fact that the book had its roots in real events and locations. Oddly enough, that was what caused them to back off.
Two of the publishers wondered if the book might generate the kind of response that came from The Blair Witch Project - where suddenly people flocked to Burkittsville Maryland causing a great deal of strife with the local community. There was apparently a lot of backlash from the movie claiming it was filmed in Burkittsville, and nervous publishers backed away from that kind of controversy at the time.
Editors are funny people. I wasn't worried about people driving up to Pignut Mountain looking for the Fitzwater cabin. I saw that as potentially good media. Besides, I didn't have an ego that assumed that millions were going to read my book. Those risks seemed minimal.
The other publisher said some of the images were disturbing. Yes, they were. He had some ideas for altering the plot, the characters etc.. Publishers do this from time to time, and generally I go along with them. After all, they allegedly know the business. But I saw that these changes were altering the fundamental parts of the story that drove the plot. I couldn't change those things - and you'll understand if you read the book, why.
Slowly the book became shelved for other projects that were moving forward. Every so often I pulled it out though, added more to it polished some of it up, played with how I wanted to tell the story of the events that unfolded in 1998 in Fauquier and Culpeper County Virginia. I sent it out now and then to a publisher but responses were lukewarm. One suggested adding zombies to the story. Talk about succumbing to the latest trend? I couldn't do that. First off it wasn't true to the events in the story, secondly, it was pretty blatant pandering. When I want to do a zombie book - I'll do it in a fictional piece where it fits my needs and desires. (And, for those of you curious, that will be next year!)
Last year I pulled the book out again. My wife told me it was time to finish it. She knew the story intimately and believed in it enough to prod me forward. I surveyed the landscape of publishers. I wanted to find a newer one, one that wouldn't attempt to change the story at all but recognize it for what it was. Some queries to authors and folks I know in the business pointed to Hydra Publishing. They loved the story for what it was and we arrived at good terms. Now that the book is out I get emails from people telling me how it frightened them, kept them up at night, caused nightmares. I love it! I did my job as a storyteller if that is result. More importantly, the story is finally out there and people like it.
Whew!
Posted by Unknown at 8:14 AM