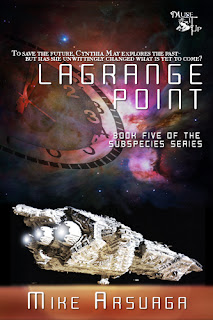 Interview with Cynthia May
Mike: Today I have with me, Cynthia May, the lead character from “Lagrange Point”, book five of the Subspecies series.
The attractive lean woman in a black military-like uniform trimmed in gold lights up the room with her presence.
Mike:  Cynthia, tell us something about yourself and the books you appear in.
Cynthia: (Smiles) I’m Commander Cynthia May, deep space explorer, granddaughter of Cynthia Meadows, and Great granddaughter of Samantha and Jim White. As a main character in “Lagrange Point” I explored space, helped colonize Mars, traveled in time, and through Gran Cynthia learned the place of our subspecies in Creation’s plan.
Mike: (Pats Cynthia’s long pale fingers folded in a slim lap.) You weren’t always at peace with the memory of your illustrious Grandmother. Tell us about it.
Cynthia: Well, all my life on Earth I lived in her shadow. She was successful and on any list of the most beautiful women who ever lived. After Mom passed away, I made up my mind to move to the Mars colonies. I thought it was important to show the Subspecies I was more than an extension of my Gran, but no matter what I did or how hard I tried it seemed everyone looked upon me as Cynthia Meadow’s granddaughter. I came to resent her terribly.
Mike: But you had a brilliant career as an explorer.
Cynthia: So I’ve heard, but nothing I did set me apart. (Smiles whimsically before continuing) Except for the change of hair color I made with each mission, that is. Anyway, this was my frustration until I met her in person as the result of entering a Lagrange point.
Mike: Lagrange points are where the gravitational fields between two or more heavenly bodies cancel out. They were discovered by the French mathematician Joseph Lagrange.
Cynthia: That’s right. By chance, we discovered while in a minor one between Earth and Mars our mental abilities expanded. I could, for example, speak ancient Greek. Others spontaneously played Mozart. Things like that. The scientists wondered what might happen inside the Prime Lagrange, where the gravities of all the bodies in the solar system canceled.
Mike: That’s where you met her.
Cynthia: Yes but before that I encountered ancestors from the Trojan War and even Great-mom Samantha White as a child. That’s when things became complicated.
Mike: We’ll get to that. Tell us about your other books.
Cynthia: “The Tenth Legion” is my only other appearance. I was younger then and satisfied with being window dressing for Subspecies, Inc. our corporation.  Only after the Subspecies faced and defeated extinction and I learned of the importance of the Martian colonies did my attitude change.  My cousin, vampire Ed White was the CEO of Subspecies, Inc. Lorna, his mate was and is my dear friend. I’m the godmother of their children
Mike: You forgot about your cameo in “Children of Subspecies”.
Cynthia: (Frowns) You wouldn’t give me any lines so I don’t count it. That was the episode of the visit with Gran Cynthia through the Prime Point. I delivered the news of her coming pregnancy, which was her fondest wish, but left out the price she’d pay.
Mike: The reason why I made you the main character in “Lagrange Point”.
Cynthia: Yes, and you permitted me to tell my version of the events.
Mike: Since Leo’s not here, why don’t you talk about him?
Cynthia: I knew him practically from the minute I landed on Mars. Our friendship stayed uncomplicated by sex. He liked boys and I preferred girls. For years I looked at him but didn’t see him, if you know what I mean. Only when placed in the most desperate situation did I recognize his worth.
Mike: Now you can talk about your adventures in time.
Cynthia: (Sighs) Where do I begin? I met Great-mom as a neglected, downtrodden child in France. When I told the one of my time, she asked me to give her younger self a letter spelling out her future. To give her hope, I supposed. On another trip, I was about to when Leo appears from nowhere. We hesitated, deciding to learn more. Bottom line, presenting the letter creates two time lines. In one, Sam and Jim suffer but Cynthia lives a long and fulfilling life. In the line I know, my gran dies of the plague and my great grandparents prosper. The timelines differ in many other, less  profound ways. The decision I must make whether or not to deliver the letter affects world history.
Mike: Don’t forget what else went on in the middle of this.
Cynthia: Oh yeah, on the voyage to the Prime Point, we solved the last mystery of the plague of 2026 that killed a sixth of the world’s population.  This was the disease that took Sam and Jim’s second litter and Gran Cynthia in “Children of Subspecies.” Someone attempted to kill me. Leo got shot and God had a last laugh on the whole matter.
Mike: Okay my pretty, what’s next for you?
Cynthia: You’re the writer but if I had a choice, I’d write about the rendezvous Leo and I had during the time of King Arthur, or what we discovered on Saturn’s moons.
Mike: Those are good ideas, but I see from the clock on the wall our time is up. I want you to know I’m proud of the character you became and believe your mother and grandmother would be too.
Cynthia: (With a twinkle of eye.) They are.
Trailers:
Subspecies: http://www.youtube.com/watch?v=i1YLeM8v99U
Subspecies, Inc.: http://www.youtube.com/watch?v=h-S7pUQwUC4
Children of Subspecies: http://www.youtube.com/watch?v=mt0ASmEAL24
The Tenth Legion: http://www.youtube.com/watch?v=K3Hm7Lkky3c&feature=email
Lagrange Point: http://youtu.be/LAvIiKfgK88 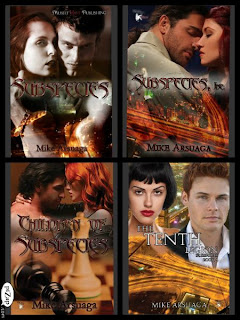 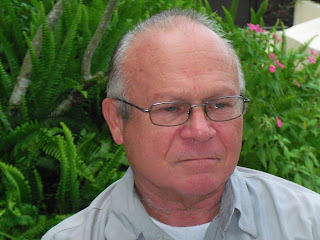 Mike Arsuaga Bio:
Raised in New Orleans, Louisiana, I completed careers in the United States Navy Submarine Force and the Transportation Security Administration.  I live in Orlando Florida with wife and Editor in Chief Cynthia, daughter Jennifer, seven year old granddaughter Larrna and partner in crime Thumper, a Yorkshire terrier.
My extensive travels in the Navy took me throughout the US, Canada, Europe, the Caribbean, and the Middle East, providing accurate and vivid settings for all stories. Although Mars figures prominently in at least one installment of The Subspecies series, I haven’t been there yet. The trip is prominent on my “bucket” list.
Subspecies, Subspecies, Inc., and Children of Subspecies are released. Tenth Legion and Lagrange Point are scheduled for release in February and May 2012, all from Muse It Hot Publishing. Sam and Jim along with their growing family refuse to go away. Presently I’m working on an anthology of short stories, designed to fill in the back stories of the important characters.
Posted by Unknown at 12:11 AM

Hi Mike, sounds like a fab series. I envy anyone that can write about time travel. I'd create the butterfly effect and there probably wouldn't be an Earth left. lol.