How Would I Cast Bounty Hunter? 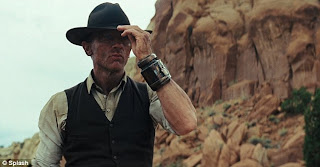 I guess there's really no discussion as to whom I would cast as the Bounty Hunter. Daniel Craig is the pick du 'jour as many of my heroes and Cowboys and Aliens along with books that I read as a kid and a teenager who fueled my imagination. Although I like looking at the lives of people and half-breeds after the war.
And honestly who looks cooler as a bad ass alien-human half-breed  trying to do the right thing against his better judgment?
As for the girl, let's be honest I saw a younger version of myself. Who wouldn't want to fall in love and have hot alien sex with a character that looks like Daniel Craig. Lizzie Preston and the judge George Lyle I saw people in the late 50's early sixties. And everyone else was more defined as a character and I didn't use a cheat in.
General Runyon was a nasty alien and General Mitchum were defined by what they did, not who or what they looked like, But Runyon was one ugly dude lol. Logan Mitchell Jr. favors his father and Alabama resembled her mother. LOL. I know, two Daniel Craigs. Delicious.
I just finished the first round of edits yesterday, maybe my book will have an earlier release date!
Posted by Unknown at 6:28 AM

Mm, Daniel Craig in Cowboys & Aliens was very yummy. I think it helped that he imbued such a sense of vulnerability into the character. He sounds like a great choice and the books sounds fun!

He really had the silent savage thing going in Cowboys & Aliens and there's a great appeal to that for me. And yes mmm Daniel Craig lol.