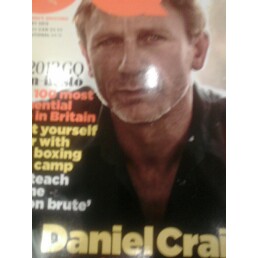 Often when I set down to write I find it difficult to focus at first. Who is my hero? Who do I want to fall in love with for however long this story is going to be? Will he be flawed? Will he be perfect? Will he be violent? Will he be gentle? And for goodness sake what is he going to look like.

As someone who has used different actors over the years to be my hero with which I can play a game of paper dolls with I have to say they have been as varied as George Clooney to Russell Crowe to Maurice Benard to of course, my hero dujour of the last few years, Daniel Craig.

I'm a big fan of the silent savage. The man who says little, but when he does you sure as hell better listen because it's bound to be important. And when he falls in love it's deeply, hopelessly, and viscerally consuming and it drives him to great acts of love and sometimes vengeance. He's always flawed and sometimes he's on the fringes of society with no desire to join the mainstream until the heroine irrevocably changes his life. She draws out the tenderness which lurks deep inside no matter how buried it is.

My heroines are a combination of tough and vulnerable and when it's right she will sacrifice everything just to be with the hero. I love epic, sweeping and timeless love and when it's tragic I want it to rip your guts out and leave you heartbroken. I want it to be satisfying and cathartic even if it isn't always happily ever after. I've yet to write a story that ended bittersweet and got published. Everything accepted has ended happily ever after.

But every time I set out to write a story I never know how it's going to end. Tragic has such an awesome feel to it. Happily ever after is a harder sell. I don't want to swallow a gallon of sugar water to tie up the loose ends. Things left unsaid are often the most powerful things  to deal with. I may even have a continuing series on my hands. YAY!

That being said bad things have to happen, love interests have to die and heroes have to suffer. That's when I love writing the most. And spending time with the Silent Savage is always the most fun of all. And an excuse to do it over and over again? Geez, I guess I have the best job in the world. I'm a writer full time. And I wouldn't trade it for anything in the world.
Posted by Unknown at 2:46 PM

I too enjoy a flawed hero. And, of course, the bad boy type. I like not knowing for sure which way he'll turn out, or even if he, indeed, IS the hero or a good guy or a bad guy. Maybe he's the antagonist. Who knows? That's the fun of writing by the seat of my pants and sorting it out in the end!

P.S. Loved Daniel Craig in Cowboys and Aliens. He was the silent savage for sure!! <3

I DO AS WELL, IT MAKES THEM MORE HUMAN AND ENDEARING!!