I had a dream last night. And I think it was affected by a WWE themed episode of Celebrity Wifeswap that was on last night. Mick Foley was one of the participants. And just so that you know, no the dream wasn't about Mick Foley. Although he seems like a very sweet man I think the squared circle and pyrotechnics were the only thing I got from the WWE in my dream.

Then I got a much sexier thing. Adrian Paul. He gave me a bracelet in the dream and I was wearing a ring on chain around my neck. (I think the Lord of the Rings themed eppy of the Big Bang I watched got to me too). 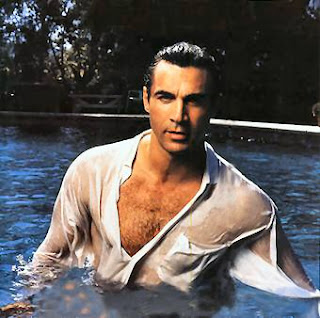 Now his wife might have something to say about that lol, and I certainly don't want to see her claws come out, and their daughter would probably be mortified to hear everyone ogle her daddy that way.

But man, he would make my day just to see him in person. Too bad he's going to be in England and not at Fandom Fest. I would pay VIP price to get his autograph. But oh well, such is life.

So if you have something that makes you feel better like a fantasy with a character who looks suspiciously like the guy in this picture which I am currently drooling over then write it, Adrian Paul won't mind. And I suspect the reading public won't mind much either. Imagine him with a Scottish brogue, mmmm even better.

Have fun ladies and gents.
Posted by Unknown at 9:09 AM