Growing up there was a movie called Red Dawn. I was 11 when I saw it and my Young Authors book that year was heavily influenced by it. I didn't win, but then, I as an odd child and people tended to a pecking order at that point.

But I've found  here recently I like the Mad Max meets GLADIATOR meets two parts  fairytale story telling style, and with it now officially available for pre-order I feel like book 1 in the Gladiator Chronicles should be celebrated. So today I'm giving away a MuseItUp Publishing gift certificate worth $10! With GLADIATOR available for the low price of $4.40 at the moment that's worth two novels or a novel and two short stories. Or 4 short stories...well you get the point. Here's the blurb and excerpt from GLADIATOR and remember for that gc leave a comment. 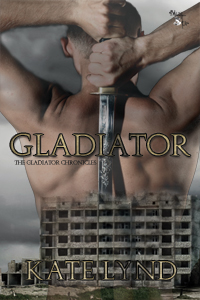 Back Cover:
Ten years ago Tristan Shane had failed to pick sides and he paid with the ultimate price—his family.  Enslaved as a post-apocalyptic gladiator, he is now faced with a similar dilemma, serve the despot  Queen and murder her innocent sister, or face certain death himself. What will he choose?
Tristan Shane was a moderate before the nuclear and economic crisis which plunged the world into darkness. While his sister Aidia ran off to fight the rebel’s war he desperately tried to hang onto normalcy and lost his wife and children in the process. Spending the next ten years as the Crown’s favored and the mob’s favorite Gladiator, he never expects to meet the Queen’s sister, Alexandra, a Healer.
She claims to be the much whispered about Savior sent to heal the wounded Earth and oceans, the one who would bring about her cruel sister’s dethroning. But is she? Or is she just a fraud? But he quickly learns her erotic touch has the power to heal his heart and his to save her life. But as the passion heightens and the danger increases will they have forever or will he have to give up everything to save the planet?
Excerpt:
“What is it you want, Veronica?”
She leaned in close and whispered seductively, “Why, you know I only want you, Tristan.”
He snatched her up by her throat, pinned her against the wall and kissed her passionately, brutally, and without clemency. When he pulled away she was smiling with a darkness that made him angry. She was a power-hungry mongrel who played on her husband’s weaknesses and jealousies. Tristan hated her. And he hated himself for f***ing her. But this was his life. He let go of her and walked away.
“Is my poor Gladiator jealous? There’s really no need for that, is there? You know you’re my favorite.”
“What is it you really want, Veronica?”
She came up behind him and seductively began to ease off his armor. He was covered in sweat and blood and he felt her shiver against his body. And as always there was a twinge of nausea that would precede the raw animal aggression.
She turned him around. He looked at her. There was no doubt about it; she was beautiful. But she was poisonous—a rattlesnake with crystal green eyes and flaming red hair. Her father had promised peace and a return to normalcy and democracy in the wake of economic and nuclear disaster, and instead this was what had become of the world. And she was no doubt always enjoining her father to maintain her life in this fashion. He loathed her. He detested her. And every time he had sex with her his intense hatred for himself deepened a little bit more.
“My dear, sweet Gladiator, as much as I’d like to celebrate your victory with you tonight, my husband wishes me to share his bed. But fear not—I do have a consolation prize for you.”
His skin began to crawl. Veronica had a twisted way of looking at what constituted a consolation prize; it was usually just a groupie who wanted to watch what the queen did with the equivalent of rock stars of the former United States of America. And he usually did the dog and pony show. But sometimes Veronica required something to prove his loyalty to her. That would be more complicated.
“What is it this time?”
She smiled. His response had given her the mistaken impression that he cared.
“The rebels have been restless. And it seems there is a young woman we have in our prison whom they want terribly. Well, frankly, they are in two minds as to what to believe. It is rumored she is the mythical Healer. The one meant to find her soul mate, so together they will lead our Nation out of the so-called darkness into which it has plunged itself.”
“And what do you want me to do?”
“Oh Tristan, why are you being so defensive? I just want you to find out whether she really is the Healer, and report to me if she is.”
“And then, what?”
“And then you let me handle it,” Veronica said, sliding back into the evil skin that was her natural state. “The rebels have no idea what it takes to run a country.”
The image of his wife being raped and murdered flooded him and it was all he could do not to throttle the queen right then and there.
“So can I count on you to do this for me or do I need to find someone else who can?”
He was no one’s hero. But she had said young woman. And he couldn’t just allow his wife’s fate to be visited upon some other unsuspecting girl. “I’ll do what I can.”
Veronica ran her index finger down his cheek and whispered, “Good boy, Tristan,” she purred. “Guard! She’ll be delivered before the night is over. I don’t know when I’ll be able to return to you, but I expect that you’ll have had enough time to gain her trust by then.”
Tristan’s stomach churned. The Healer? In the beginning there had been whispers of it. But he had never believed in such a thing. It had been years since the crown had feared anything. And now this. He said nothing as the queen was escorted away. He was left to think about the young woman he might be forced to turn over in the end.
PRE-ORDER Link: http://museituppublishing.com/bookstore2/index.php?page=shop.product_details&flypage=flypage.tpl&product_id=495&category_id=69&option=com_virtuemart&Itemid=1

The book sounds terrific. And what a cover! I'm putting this one on my reading list for sure!

Thank you for the compliment. I'm hard at work on book 2 in the series now, ORACLE!

Gladiator's have always been an interesting topic. This looks like it was an enormous amount of work

You've hooked me. I want to find out if the Healer is the Queen's sister and what kind of sparks will fly between her and the Gladiator.

Sounds like you have all the ingredients for a very interesting read!