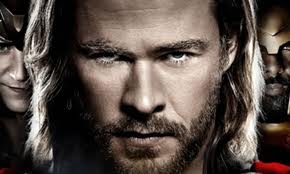 After the Avengers and seeing previews for Snow White & the Huntsman I knew who my new hero for ORACLE was going to be. He's an Aussie and he bears a striking resemblance to Russell Crowe so it's no wonder that I find him absolutely delicious to look at.

I recently finished book one in the Gunpowder & Lead series that I'm co-authoring, that is awesome all by itself. I got to write a Daniel Craig hero based on a Hatfield's & McCoys meets Mad Max scenario. Daniel is my main man these days. But I right at the end of that book I found myself thinking about book 2 of the Gladiator Chronicles, ORACLE which I seemed to be wrestling with so much. I like tortured heroes. Heroes with angst and since I'm so in love with Daniel at the moment it was hard to see myself falling in love with anyone else. Until I saw the Avengers and well look at the assorted man candy there. Chris Hemsworth, Jeremy Renner, and Robert Downey Jr. Robert is really the thinking woman's superhero. While Chris is sexy even if he's still young. Jeremy Renner is just the guy you want to have sweaty hot...never mind I digress. But for ORACLE it's all about Chris. Or should I say Cain. I know, I even stuck with the same first initial. I tapped into the raw, violent, aggression which is an element all of my heroes must have in this series.

Gunpowder & Lead is a quiet series punctuated by horrible violence during a turbulent time in the future. ORACLE is full on hot emotional connection, steamy sex, and violence in a turbulent time where the hero and heroine are connected by prophecy and fated to put the nail in exiled queen's coffin.

I like what I'm writing about and hope you do to.
Posted by Unknown at 10:09 AM