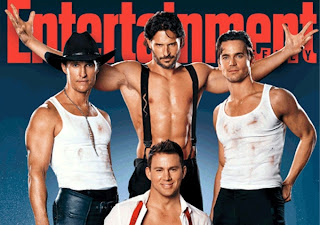 Let's face it folks, I love Steven Soderberg's work as much as the next guy, hell, he's brilliant. And he's known for taking his idependent background and seamlessly meshing it with the Hollywood world of fizz and pop. So what's the bottom line on Magic Mike? He tries to have it both ways and he comes out with half baked results.

He wanted to show the gritty underworld of stripping and how ultimately it exploits the performers and uses them up. But let's be honest ladies. Look at the beefcake to the left and tell me you want to go see a bunch of independent grit. No, you want the pop and fizz of Ocean's Eleven and you want to shove your singles down the g-strings of this hunky men.

I wasn't enamored with the girl who was supposed to be Mike's reason for changing. She was wooden and stiff. The character wasn't written all that well and if she gets any nominations it will be because it was a thin year at the multiplex. Channing Tatum as Mike was sympathetic and hunky and I rooted for him to get what he wanted in the end. Matthew, he's crazier than a hoot owl and he probably gave the most fully developed performance as Dallas the owner of the strip club. And his strip tease near the end of the movie is well worth the six dollars I paid to get in.

I'd give it two and a half stars. There are lots of strip scenes where you get to see A LOT of what these men have to offer. You'd pay a twenty dollar cover charge to see a lot worse in real life six bucks ain't bad to see Channing bump and grind to 'Pony' and Mr. Werewolf from True Blood come out in a fireman's uniform.And extras in this movie, I don't think they were acting lol.

Went with my daughter/friends. Kept waiting for a plot! One or two dance scenes were good - that was about it! Just figured I was too old for the movie. When show was over, the one man in the audience got up started doing some moves. Got lots of whistles/cat calls! Best part of the night! LOL

I also went with my adult daughters and I don't agree with this review. First of all the first dance/strip number is worth the price of admission, which for us is $12:) . I spent a lot of this movie ogling these guys, but agree Channing Tatum did a good job. This could have zipped by with the beefcake, but what we liked was the look at the whole scene. For a change the men are objectified. Also you see the financial side of this life and the toll it takes on someone who wants more in their life. Soderberg moves this into another level. While Matthew's solo is hot, there is a desperation about him when he gets off the stage. I also disagree about the girl. She is subtle and very normal in her reactions. However, I recommend every woman sees this!!

My college-aged daughter saw it on opening night with some friends. She says there were "old ladies" like me there, probably a bit tipsy, yelling at the screen early on, "Bring on the banana hammocks!" She thought the guys were hot, which is the only reason she goes to the Twilight movies also. I figure I'll wait for the rental, unless she wants to go see it at the cheapo-place with me in a few months.

But objectifying men for a change? I like that!

Thanks for the review. I wanted to see it the other day, but couldn't convince hubby. I think it's the kind of movie you see with other women. I was never interested in the Chippendales' shows, but I want to see this movie more out of curiosity. I'll wait for it on DVD and get it from Netflix.

I'll probable wait to rent this movie from netflex.

ALL of the dance routines are well worth the admission, which for me was only $6.00, but they were worth well beyond that.

I initially went to see Joe Manganiello, man above all men and the sexiest werewolf on True Blood. How can I resist seeing a male stripper movie in which Joe's referred to as Big **** Richie?
MM saddened me by cutting down BDR's feature dance. Believe me, what you see is very nice, quite nice, but still I missed the entire dance.
Even Tatum said he lamented over them cutting Joe's scene.

I will admit, Channing's Pony dance was by far the hottest! I can't stop thinking about that dance or this movie ever since I saw it last Saturday with my cousin and aunt.
They came out of the theater saying they were disappointed. I was VERY satisfied.

Cody Horn (the sister of Adam/Pettyfer) could be a little stiff or wooden at times, but her character's a bit of a prude so most of the time it didn't bother me. That said, the only stiff as wood performance I want to see in a movie about male strippers... Oh, sorry, mind in the gutter.

This movie blew 50 Shades of Grey way out of the water as far as sexiness, steaminess and plot. (Not that's a hard goal--didn't care for 50.)