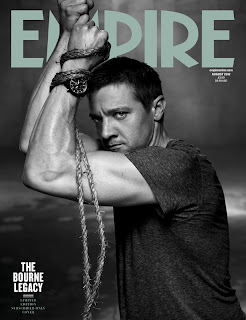 When you're as in love with Daniel Craig as I am it's hard to find someone else to dream about when penning your latest story. Since I had never written a sequel, let alone a trilogy about three different men who each are hardened, bitter, jaded and angry men.

Joshua Livingston came from the shadows of ORACLE and nearly stole the book away from Cain Seymour. But now he has a stage of his own to play on and while we're just in the beginning stages of development of his arc, it is clear, he has a temper, is quick to use against his enemies and has a take no prisoners style that really is all his own.

Daniel Craig was my first love in the publishing world. The man can do just about any role he wants and he has a steely blue eyed gaze that just gives me chills every time I see him on a magazine cover or poster shot. And when he acts, well, sooner or later that man is going to have an Oscar on his shelf. And when I wrote GLADIATOR he was the embodiment of every jaded, self-loathing aspect I had about myself. Only I would have wanted Tristan Shane to heal me.

In ORACLE Chris Hemsworth was my man, and to be honest he had the softest heart of the men and he was the most difficult to write. Cain Seymour was a mystic and had the power of second sight. He was intense, ala the Huntsman, but he loved the heroine deeply and when he thought he might lose her well, his search took him to the most unlikely of places.

So now we are at the finish line with QUEEN. I needed a hero who could redeem the most irredeemable of villains. Veronica, the queen who brought on all the suffering of her siblings to begin with. I needed a hero in as much need of salvation of spirit as she was. And my friend and sometime co-author Melissa Goodman (you should really checkout her debut book, It's Your Love, http://www.amazon.com/Its-Your-Love-ebook/dp/B008H50OLU/ref=sr_1_1?ie=UTF8&qid=1342561390&sr=8-1&keywords=It%27s+Your+Love+Melissa+Goodman) showed me this picture of Jeremy Renner. He has the jaded  rage and intensity that I demand of all my heroes in his eyes and physical strength in those arms that my heroine will undoubtedly take pleasure in ;) lol.

So everyone, meet Joshua, the more than capable hero of QUEEN. He's got a long way to go, but I'm really enjoying his story right now. I hope you will too.

MY MY I'D LOVE TO LICK HIS SHOULDERS! LOL