Okay, I'll admit it. I was shaking in my boots when it came to my first cover from Muse It Up Publishing. I'd seen some that I liked some that I didn't. But then what do I know? I'm not a graphic designer and don't know all the hard work that it takes to create one. But when I finally opened my first gift from Muse It Up Publishing 's resident graphic artist I have to say I think I can't wait to enter the thing in cover contests or I can't wait until different sites take notice.

Another Way To Die is the first in my Lost Legacy series which so far has three books planned. Maybe four. It is a dark romantic suspense novel that is one part Casino Royale, one part The Girl With The Dragon Tattoo and a love story all rolled into one. I really wanted Delilah to have the freedom to see the book cover as any graphic novelist did as she saw it. Because as much as I know about novel writing I know squat when it comes to graphic art.

So when I opened my final product last night I have to say I was doing the happy dance. It looked like a REAL book cover. (I'm a real boy as Pinnochio would say) It looked like a thriller was supposed to look. Delilah, call me a convert. I adore my cover and I plan to show it off to anyone who'll look at it. Including my family and hopefully the people at Fandom Fest and Killer Nashville in June & July and RT when Another Way To Die drops in January of next year. 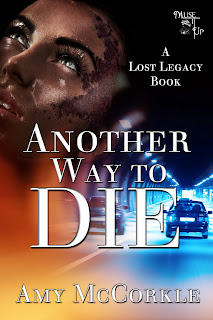 Fantastic cover, Amy - and I love the title. sa a James Bond fan and GirlWDTatoo fan, this is one I'll be watching out for!

Thank you, I don't claim any credit for the cover art but I loved the story.