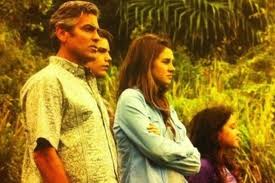 Yesterday was a good day. Sometimes the bipolar disorder is really nasty and doesn't allow for any fun. Yesterday was great. I went to the bookstore. I wrote. I set up an author event, laid the ground work for another and saw one of the best films of the year. Definitely top three. The Help and CrazyStupidLove being the other two. Now I looooooved Cowboys & Aliens but that's not the kind of movie Oscar likes, although I think the mash-up of Sci-Fi and Western genres should make it a contender, but I digress.

Films on the human condition and epics are usually what the Academy go for and when you have the pleasure of sitting down and watching a great one that is able to avoid taking itself too seriously then you're in a for a real treat.

Are you from a messed up family? Then you are going to love The Descendants. I think my best friend and I laughed in parts because we know people like the ones in this film and those around us thought we were nuts. Or maybe they thought they were supposed to be 'serious'. Listen this is what the film is about.

George Clooney plays Matt King a married father of two girls who is dealing with the fact his wife is in a coma and discovers she's been having an affair and that she was going to leave him. He is totally disconnected from his emotions and his family and he must come to terms with that, connect with his daughter and figure out how he feels about his wife.

George really knocks it out of the park in this film, and may be looking at an Oscar nomination, as does the young lady who plays his eldest daughter annd Robert Forrester who plays his father-in-law. This is the stuff Best Pictures are made of. And even though it's a heavy film it does have a powerful message at the end and is totally worth the price of admission. 4 Stars out of 4 Stars.
Posted by Unknown at 9:40 AM

Amy I totally agree with you. This movie is slow moving, but it is not boring. Unfortunately, I missed a little bit of it, but my kids filled me in. I loved George Clooney's performance and the performances of everyone in the movie were perfect. I think it's the best movie I've seen this year!!

The guy who directed Sideways directed The Descendants. I loved Sideways too. Although I hated About Schmidt. Talk about an overrated film.