It's that time of year again. Awards show season. I know it's just a popularity contest and not necessarily about who has the best performance because SOA was totally shut out of the nominations. Which has some of the best dramatic performances on television, Kate Segal, Ron Pearlman, Charlie Hunam and a score of other actors could have dominated from this show. It just goes to show where often and older, squeamish generation of 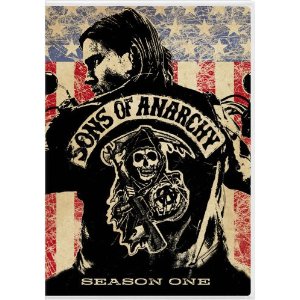 actors who can't take it when the envelope is pushed. Sometimes they look down on something they don't understand. Or just plain fear it. Last year Kate Segal won for Sons. This year she was shut out. Sometimes you just have to realize you're never going to win the approval of the mainstream and go your own way.

Yes Sons of Anarchy is violent. Some would call it a violent soap opera. But in reality it is Shakespearian sporting its very own Lady MacBeth in Gemma and it's own Hamlet in Charlie Hunam. And this season they were never better than in the closing episode with song House of the Rising Sun playing and Jax taking the head of the table where his murdered father by his wife and best friend had set only 24hrs before. The way everyone played their part was absolutely fabulous.
As a writer you dream of ending your stories this way. The creator of the show says he has two more years worth of story. A shame. I adored X-Files even in that choppy 7th season but left after they replaced BOTH title characters.

Stephen King likes a lot of the same shows I do. Only I'm a big fat nobody and he's a big enough writing star to be able to do a featured walk on role in Sons. Awesome. I hope you'll check out this show. Awards or not. I don't know if Sons will travel the road of the X-Files or to the elegant ending of LOST, but I'm all in for the ride.
Posted by Unknown at 2:17 PM