The Girl With the Dragon Tattoo- The Review 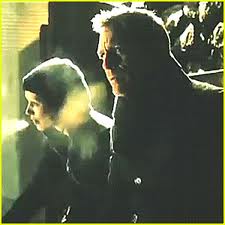 The Hollywood version of the Girl With the Dragon Tattoo has arrived and let me just say, for someone who has been waiting for this film for quite some time it lived up to all of my expectations and then some. From Trent Reznor's terrific score to Fincher's use of stark, dark cinematography the film resonates with the thrilling, pulsating power that the books do and leaves no question as to if Fincher could carry an American version of the already popular Swedish classic.

For those who know nothing about the books, a quick primer. Mikail Blomkvist is a fallen from grace journalist set up by a distasteful sort and is thus without a place of employment at the beginning of the film.

Which is how he becomes drawn into the mystery of Harriet Vanger's mysterious disappearance from her family's estate. Which is how he comes to know Lsbeth Salander a hacker who doesn't suffer fools lightly and will do anything to protect herself.

Slowly they begin to trust one another and a partnership blossoms in the midst of some of the darkest shit imaginable. It is easy to see why Rooney Mara received a Golden Globe nomination but Daniel Craig is no less a great actor he's just her calm straight man although he is something of a womanizer which sets up an ending not everyone will find satisfying.

Just remember this is not a romance and you'll be fine. But the violence depicted in the film is dark, disturbing, but lightened from the book. I give this film a four star rating. As my sister says it's nothing Lsbeth Salander can't handle.
Posted by Unknown at 3:20 AM

Great review Amy. I don't usually watch thrillers, but you've got me wondering about seeing this one. Thank you for sharing.

As a swede and as I have seen the swedish version of this movie I can agree to 100%!

Thanks for the comments. I believe the Swedish Girl is in the new Sherlock Holmes movie too.

Thanks for the review, Amy. It's always great to get a review from a fellow author. I never know whether to trust reviews from newspapers and magazines