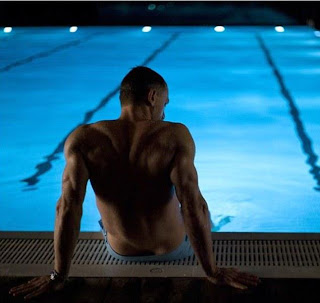 Meet Daniel Logan, hero of this Friday's release Another Way To Die. The man, the myth, the legend. The only thing that would make him yummier is is if I had spread chocolate sauce over his body and licked off his imaginary body. But I digress.

Daniel Logan is a tortured man with tortured past trying desperately to find his way and do the right thing. He was once married to a woman who was obsessed with Jack Sands.

In the beginning he was a good man with a tortured past. A weak willed father who abandoned him to a mother who was, unbeknownst to him, obsessed with Jack Sands. And when he couldn't live up to her impossible standards she abused him mentally, emotionally, and physically. Her rage knew no bounds and once he was old enough he fled her house to be with a woman who was, in retrospect, just like her.

His wife betrayed him and Jack used that to bend him to his will. Then a chance meeting with the heroine, Jack's daughter Almira, irrevocably changes him.

Daniel is the bad boy with the heart of gold. A man trained to shoot to kill. A man hard to know, but willing to go to any lengths to protect the ones he loves. Still waters run deep with him, and if you take the time to get to know him you just might be rewarded the way I was by the end of their story--I was in love. I hope you will be too this Friday when Another Way To Die releases from http://MuseItUpPublishing.com!
Posted by Unknown at 10:14 AM

Thank you, and I believe there was another comment here, and to answer your question, Jack is bad bad bad man with no redeeming quality to him whatsoever.