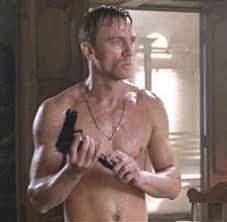 There is a way of viewing your hero and executing your imagination to make it match what's going on in that feverish brain of yours. Is it normal to sit for hours on end conjuring up fictional people and places all so you can get a story out of you. I don't know if it's normal but I know I've had several actors I've used as models, of course there's Daniel Craig which you've all heard me gone on endlessly about now. But in the beginning there were others. Such as this guy:

He's Maurice Benard and he's special for a host of a myriad of reasons. He has that intensity that I like in an actor but he has always been very open about his battle with Bipolar Disorder. And his openness allowed me to seek help when I might not have had a clue about what was going on with me otherwise. It also allowed me to research the medicine's I've been placed on. Then  there's others like George Clooney and Ben Aflleck. But this guy has been pretty prominent too

he to has that intensity that I like so much for my characters. Their ability as actors fuel my imagination and well, let's be honest Daniel Craig, Maurice Benard, and Real Andrews are all pretty easy on the eyes to lol ;).

I wish there was a way to reach to them and thank them for everything that they've done, or rather what their work has done for me and my career over the years. They helped me survive some very rough waters while growing up and still even as an adult. I am fortunate also to have found http://MuseItUpPublishing.com as a home for two of my books. They've given me my big break and I would recommend them to anyone looking for a home for their work. As I would recommend any of the above three guys as story fodder. Good luck out there and when I have more of REBEL I'll share it with you.
Posted by Unknown at 3:51 AM

Right with you, Amy. Yes, actors and actresses can sometimes help with your characters. But the funny thing for me is, mostly I write the character and then realize that a certain actor or actress would be just perfect!