Well, it appears as if GLADIATOR has come to an end but that a series has been born, the second book is rattling around in my brain. It is called REBEL.

REBEL is the story of Ian Patterson, a man with no memory of his past who takes up arms in the wake of the Earth's great healing. Drawn to a tough as nail rebel leader Layla they connect when they survive an encounter to the exiled queen's elite guard. 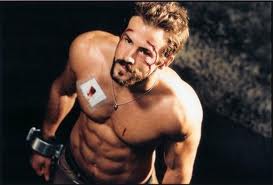 So who should Ian be this guy: Actually I think it should be. I was thinking James McAvoy but Ryan is just so delicious in this picture and dirty hot in a way that he fits the bill quite nicely.

Finding the Alpha in Ryan as opposed to the funny pretty guy was difficult and if I knew him I might already know this. But I don't and am forced to rely on movies promo pics and photo shoots for images. This picture allows me to project my vision for my character of Ian.

So now that things are in order I am going to settle in for a writing session.
Posted by Unknown at 8:03 AM

Ryan I love Ryan. I loved him in Two guys a Girl and a Pizza place. Yes, scary, but true